Hittegods to be found back in the Hittestaket or Hittegjerde. Three businessmen found at the Vondelpark discussing the Norwegian, Danish and Hungarian translation of the word Vindhek.
This word doesn´t exist! says Laszlo from Hungaria. And I explain to him that indeed I invented the word myself as a title to the art installation. Now I am looking for proper translations that will do justice to the Dutch original word which reflects exactly what it is, in a very concise way, brief, clear and comprehensible. Trovappiglio, the Italian translation is a good example, useful and usable.

A business trip to Amsterdam

Flemming from Denmark, Harald from Norway and Laszlo from Hungary Magyarország are on a business trip. During their lunch break they take a leisure walk and stroll around the beautiful Vondelpark.
Amazing, great, says Laszlo when discovering the Findfence in the middle of het vast park. And of course Flemming is kindly invited to visit the Danish page  Hvordan wirker Hittehegn on this website that explains what the Hittestaket is all about.

In Canada they love the Findfence too 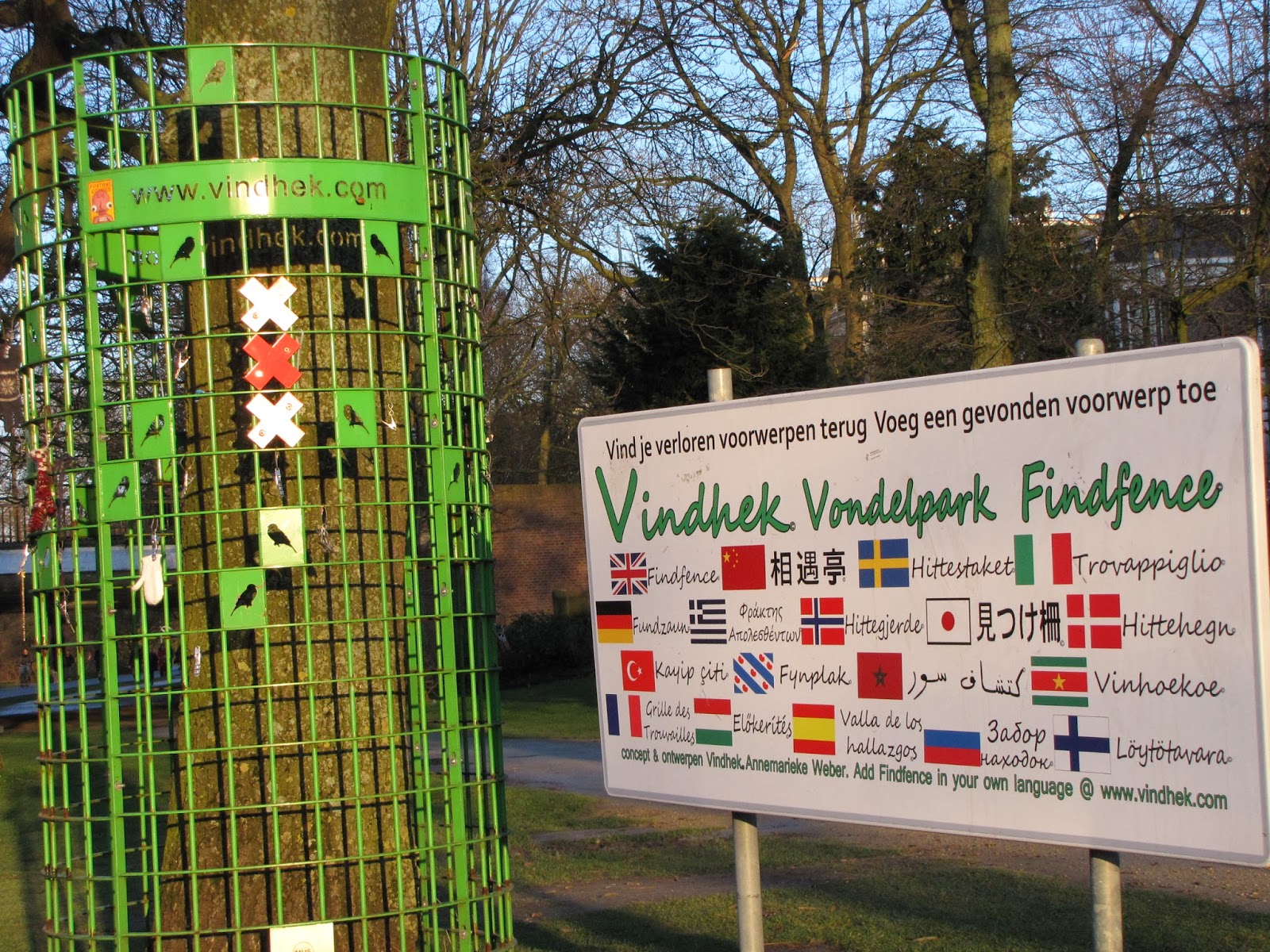 Art you can use

Blogs and photos about the interactive art installation Vindhek / Findfence appear in all over the world in international social media. A great blog by Sanna from Southern Ontario,Canada with enthousiastic reactions. Thank you Sanna for your thourough research.

While walking through the Vondelpark one morning 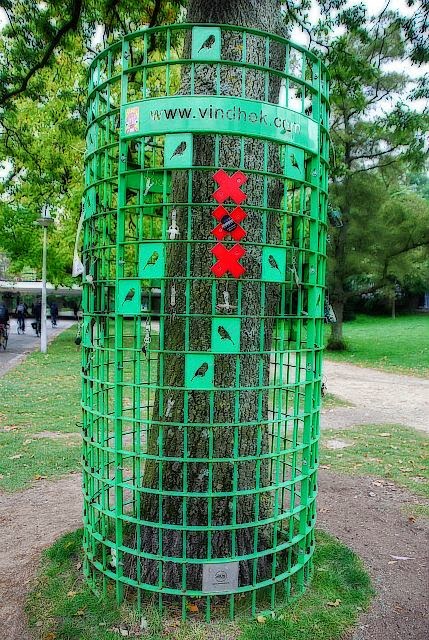 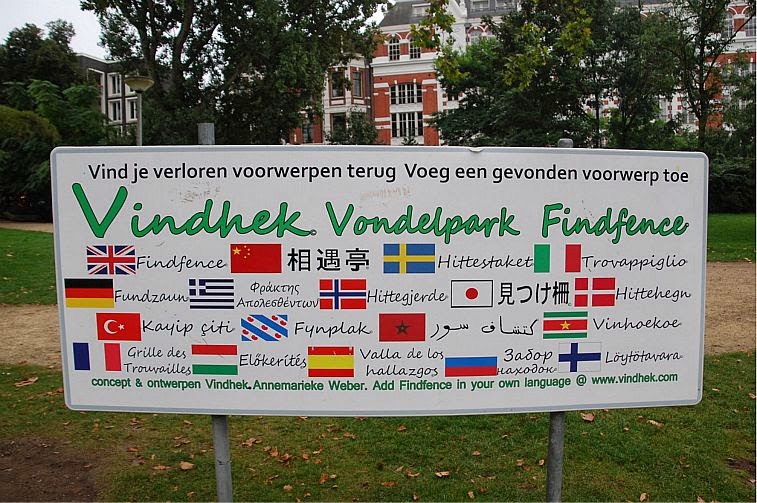 The fence surrounding the tree was a ‘Findfence’ or a lost and found fence.  The sign says something along the lines of “find a lost object, add a found one”.  If you find something that someone has dropped, you can hook it onto the fence.  If you’ve lost something, this might be a great place to look for it after you’ve done a thorough pocket and ground search.  What a great idea. honesty and trust, and so friendly!
but I wondered about the flags for 18 different languages (English, Chinese, Swedish, Italian, German, Greek, Norwegian, Japanese, Danish, Turkish, Frisian, Moroccan, Surinamese, French, Hungarian, Spanish, Russian, Finnish). I think the idea is to make the fence an interactive experience where you upload a photo onto some social media site and link back to Vindhek. 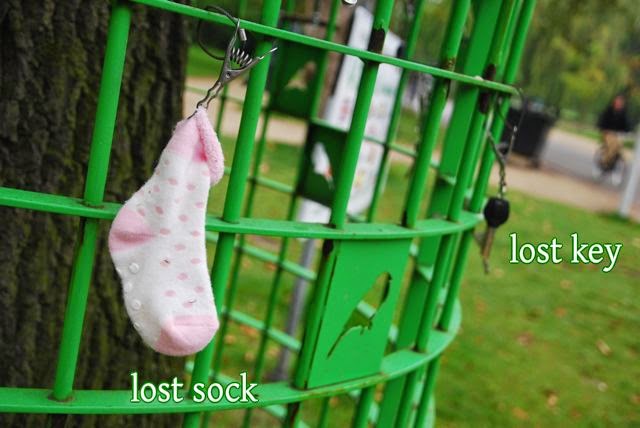 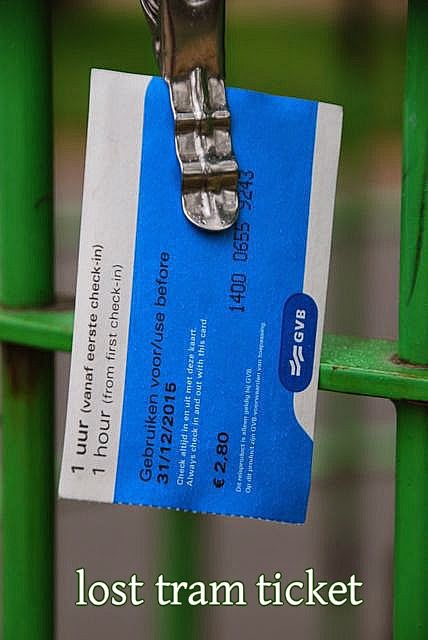 Anyway, as you can see there weren’t too many objects on the fence on this particular weekend, several keys, though! Read the inventory made by Johann from Maine, USA.
I imagine that there would be many lost mittens, scarves, keys etc., in the winter as people constantly put their hands in and out of their pockets.Yes, mostly coins from every country you could imagine.
Oh, and as an aside, during my research once I got home, I discovered that the birds were special to Amsterdam – they are finches. in Utrecht the birds are robins, and in Amersfoort they are swallows.

Delores October 1, 2014What a great idea…a lost and found fence.
VioletSky It’s an awfully big park, so I wonder how far away some of these found objects were found. I was also concerned about so many lost keys! but, yes, a great idea
Restlessjo: I’d be seriously tempted to lose something on purpose, just so I could use the fence.

Nice isn’t it?
Many thanks for your link to mine and for your very interesting contribution. It will appear at the bottom of my next week’s walk. See you then!

VioletSky: If I lived there, I think I’d be playing along and at least keeping my eye open while out on my daily stroll.
Tom: Great idea!
Linda:I love the idea of a Findfence!
PC:That is soo cool.
Cranberry Morning: Fun post! Like that lonely little sock.

So glad you stopped in today!
Norma: what a novel idea for lost and found! and it makes for an interesting, artsy display too.
Gemma: An interesting idea. We could do with a feature like that on a tree near our beach foreshore – especially in summer.
Sallie: That is absolutely the neatest thing ever! I love the idea. Here in Oregon there would be a ton of umbrellas. People are always losing them (not that I know that from personal experience or anything ;>)
Ruth: How very unusual!

Vondelpark has a Findfence. If you find something in the park, clip it to the fence. I did an inventory.
2 pieces of candy in wrappers
1 rock
1 pacifier
3 coins
1 note from tourists saying they love Amsterdam
3 sets of keys
1 piece of cardboard approx 1″x4″
1 thing you put around your neck to hold ID
2 businesses cards
1 hotel swipe key
1 fluffy red thingy
1 blue plastic wearable thing 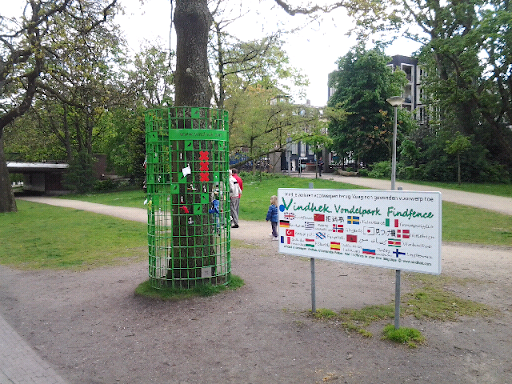 Egypt, the three tall men I met today are students from Egypt. “Five euros” the funniest one responds when I ask them to pose for the international photo series at The Vondelpark Findfence. And when I ask them to step next to the international sign with 16 translations, he says: “Another 5 euros, we are poor students.”
The conversations starts getting hilarious. So I try to explain the difference between humour from Amsterdam and Rotterdam, in my best and impeccable Dunglish. And the funniest student concludes he has to visit Rotterdam too.

They start reading the sign next to the Vindhek and they don´t understand the, supposed, Arabic translation so they write a new one in my notebook. “I hope you will be able to read his handwriting” one of them says, the other busy writing. “You are my first Egyptians,” I say. “Well, we hope we will not be your last.” Another cheerful and lighthearted meeting at the art installation.

By the way, this note reminds me of the Yogoslav translation I received: pronalazacka ograda. But I didn´t have a chance to ask another Yogoslav if the translation is correct.